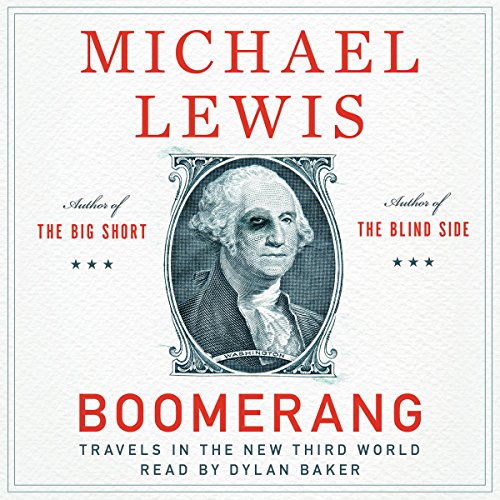 From the #1 New York Times best-selling author of The Big Short, Liar’s Poker and The Blind Side!

The tsunami of cheap credit that rolled across the planet between 2002 and 2008 was more than a simple financial phenomenon: it was temptation, offering entire societies the chance to reveal aspects of their characters they could not normally afford to indulge.

The Greeks wanted to turn their country into a pinata stuffed with cash and allow as many citizens as possible to take a whack at it. The Germans wanted to be even more German; the Irish wanted to stop being Irish.

The trademark of Michael Lewis’s best sellers is to tell an important and complex story through characters so outsized and outrageously weird that you’d think they have to be invented. (You’d be wrong.) In Boomerang, we meet a brilliant monk who has figured out how to game Greek capitalism to save his failing monastery; a cod fisherman who, with three days’ training, becomes a currency trader for an Icelandic bank; and an Irish real estate developer so outraged by the collapse of his business that he drives across the country to attack the Irish Parliament with his earth-moving equipment.

Lewis’s investigation of bubbles beyond our shores is so brilliantly, sadly hilarious that it leads the American listener to a comfortable complacency: Oh, those foolish foreigners. But when Lewis turns a merciless eye on California and Washington DC, we see that the narrative is a trap baited with humor, and we understand the reckoning that awaits the greatest and greediest of debtor nations.

“No one writes with more narrative panache about money and finance than Lewis.” (Michiko Kakutani, New York Times)

Good story, but just that

As usual Michael Lewis is a great story teller. He guides us through the origins of the European sovereign debt crisis by illustrating the build-up of a rotten system with thrilling stories of individuals. The problem is that he uses a big part of the book trying to prove that these individuals’ actions have their roots in national character. Depicting Germany as an anal society might have some comedic element about it, but by focusing on pseudo-explanations Lewis avoids a serious analysis of the causes. Fiction seems to be more important than facts.
The narrator does a great job and the audio book can easily be listened to while doing something

Informative, entertaining at the same time

Well-chosen collection of interviews, told entertainingly without sacrificing the substance. Although written immediately after the events without benefit of the hindsight, feels still current enough.

Entertaining, insightful with a lot of humor

If you like Michael Lewis, his style of writing and are interested in finance and human behavior this book is probably for you. It is a light read, written with a lot of wit and humor. I listened to the book in two sittings, it is rather short, but I enjoyed every minute of it.

A nice account and refresher on the events that unfolded during the financial crisis about 10 years ago. Not as good as The Big Short, but better than Flash Boys in my opinion.