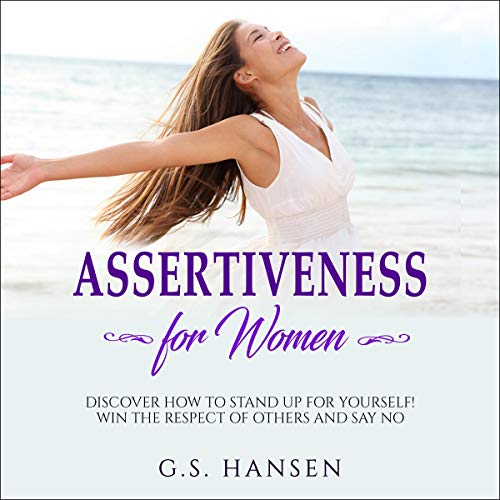 Assertiveness for Women: Discover How to Stand Up for Yourself! Win the Respect of Others and Say No

If you're not sure what the word actually means, I'll describe assertiveness to give you a better understanding of how to integrate it into your character. Assertiveness is about being self-confident. You are wholeheartedly embracing yourself and knowing that what makes you different is what makes you attractive.

Most women are trying to make themselves better, which is not a bad thing. This is when these women shine in tandem with assertiveness. This is because only those who try to drag them down are raising their positive traits and ignoring people.

Women sometimes find themselves in fierce arguments. The views and opinions of people sometimes come into conflict and create drama. These conversations may now and then lead to more complicated situations. Knowing how to be assertive in a nice way can prevent the blowing up of an argument and can even help one win an argument.

Learning how to be an assertive woman consists of two things: One a tendency toward a positive attitude, and the other a tendency toward daring. Assertiveness means you are bold enough to allow your views and opinions to be heard.

A positive outlook also goes hand in hand with the assertiveness of an assertive woman. She talks with a positive attitude in spite of a subject that may be about negative things. The explanation for this is because a person with a negative attitude runs the risk of losing his or her control and may say things that might either later be regretted or may not support the merits of the claim. Be sure to think about the words you're using carefully and don't just ramble on. More words are not a sign of affirmation. This won't help you win the person you're speaking to and could be considered rude.

An assertive person is not one who tries to find a balance between passivity and aggressively, but is a completely different idea. This simply means you're not going to be bullied to compromise your convictions or ideals when you're in a debate. It means you're going to stand up to your ground. To expose the truth you carry, it conveys every thought and every word with grace and elegance. It means that there is no need to belittle or threaten, but because you have the power of truth on your hand, it is yours to possess beauty, elegance, and poise.

Look at it from the point of view of another person. Be sure that you were careful about your reality. You should back up the things you want to say. Know the counter-arguments that may come beforehand, if possible, and be willing to respond to them. Look at it from a different person's perspective. Step into their shoes and try to figure out why their place is being taken. This can encourage you to see holes in the other person's argument or may cause you to change your own mind if that is what the reality dictates.

The issue of assertiveness as a matter of great importance. It is a matter of an inner and outer sense of power or lack of power over one's own life and path.

Assertiveness is largely the realization that you are in control of what you are or are not going to do, but not in control of what others are or are not going to do. Passive people tend not to have power over what they are doing, whereas aggressive people tend to try to regulate what everyone is doing (and in sometimes contradictory ways passive-aggressive people switch between the two). Assertiveness means simply sticking to yourself - your time, power, money, work, and ideas. Assertiveness strikes a happy balance between passivity and aggressiveness, helping you to govern your destiny without competing with others.

The fear of offending others and not being accepted is what stops most people from interacting assertively.

Das sagen andere Hörer zu Assertiveness for Women: Discover How to Stand Up for Yourself! Win the Respect of Others and Say No