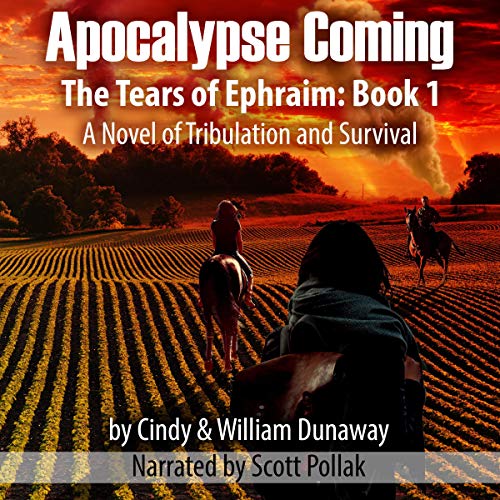 Apocalypse Coming: A Novel of Tribulation and Survival

Apocalypse Coming: A Novel of Tribulation and Survival

"For the time will come when people will not put up with sound doctrine. Instead, to suit their own desires, they will gather around them a great number of teachers to say what their itching ears want to hear."

Part of the west coast is trying to recover from a series of devastating earthquakes and widespread wildfires. This caused a record drop in our modern-day stock market, and due to a national debt of over $28 trillion, the value of the dollar is on the edge of collapsing, causing massive layoffs to start taking place across the country.

At the same time, after a political protest is hijacked, riots start breaking out in most of our major cities.

Our enemies see our weakness and know it's time to take their place as world leaders. Two countries have come up with a way to do just that and have set everything into motion.

Vince and Kim Johnson live on a farm 40 miles to the southeast of Kansas City, Missouri.

After serving 17 years in the Army, due to an injury, Vince had to take early medical retirement. Now, the most he thinks he must fight is cabin fever. Little does he know that a chain of events is about to take place that will test all his training and leadership skills.

They are reunited with family, inexperienced friends, plus four of the men Vince served with while in the Army, to prepare and try to survive what might be the start of the actual apocalypse.

Our novel isn't for everyone as it is intentionally written to be a bit provocative, and it is based on how the real world is; not how some like to pretend it is.

Contains some adult and graphic language and descriptions.

The definition of insanity is supporting a political party and movement that wants to defund our police, appease anarchists and the mob rule, slash our military budget, and take away our constitutional rights of voicing our opinion and defending ourselves.

Don't forget the old adage: "Be careful what you wish for, you may just get it."