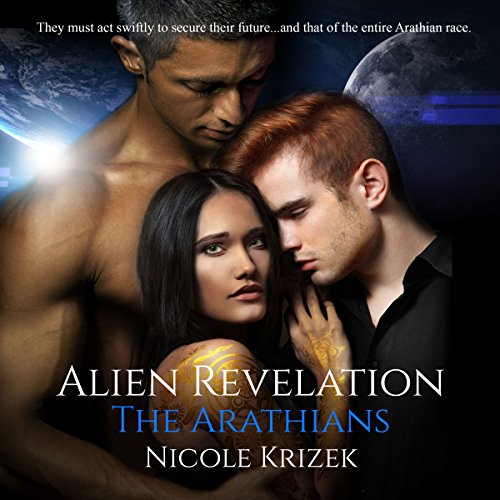 Heralded as the saviors of the Arathian species for their ability to procreate with the infertile Arathians, Earthers are honored citizens on Arath. While his son and extended family seem to be enjoying their new lives on the alien planet, the young widower, Conall MacLeod, feels like he doesn’t have a purpose in their extraordinary world.

His future is forever changed when he meets an Arathian male and female who make him wish for a second chance at love. But nothing is ever easy…

Conall’s self-identity is entrenched in the idea that he’s a monogamous - and heterosexual - man, yet he finds himself unexpectedly lusting after two people, one of them, shockingly, male. He can’t deny that he craves things he’s never wanted before, but if he’s ever going to find love again, he must get past his insecurities and rewrite his own self-image.

Onalee Cormikan is the co-heiress to Cormikan Industries, the leading medical research firm on Arath, which is devoted to finding a cure for their infertility. Considered reclusive by her peers after the tragic death of her parents, she’s content to support her older brother in the search for a cure... until she meets Brogan, Conall, and his family.

They make her yearn to step out of her possessive brother’s shadow, and explore what - and who - she wants in life.

Brogan is a First Lieutenant of the Arathian Royal Guard, entrusted with the protection of Arath’s soon-to-be monarchs. Solely dedicated to his job, he never expected to find a future outside his passion for his work. Yet Conall’s internal struggles seem to stand in the way of their happy future together as a trio. It’s a good thing Brogan likes a challenge.