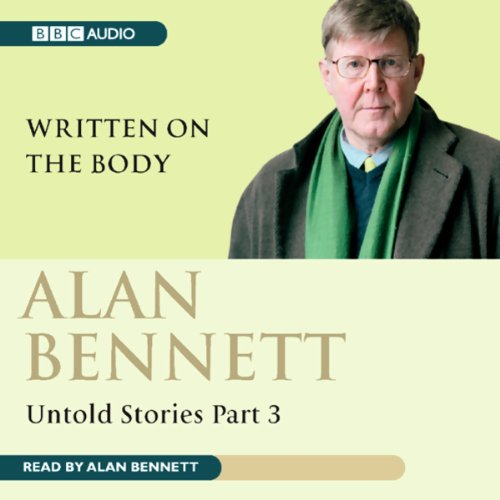 Untold Stories, Alan Bennett's first major collection of prose since his bestselling Writing Home, brings together the finest and funniest of his writing over the last 10 years. Following on from Untold Stories: Part 1: Stories and Part 2: The Diaries (also available from BBC Audiobooks), Part 3: Written on the Body is both a reflection on Alan Bennett's childhood and schooldays and a meditation on writing. Written on the Body is a sideways look at Bennett's schooldays at Leeds Modern School, and a recollection of the growing pains of puberty. Seeing Stars is a nostalgic view of the movies of the Forties, seen by Bennett and his family in any one of the half a dozen cinemas in their district in Leeds, including the Western, the Clifton, the Picturedrome, and the Lyric. Finally, Staring Out of the Window lets us into Bennett's creative process, which apparently consists of a good deal of...well...staring out of the window.

Alan Bennett's television series Talking Heads has become a modern-day classic, as have many of his works for the stage, including Forty Years On, The Lady in the Van, The Madness of George III (together with the Oscar-nominated screenplay The Madness of King George) and an adaptation of The Wind in the Willows. The History Boys won the Evening Standard and Critics' Circle awards for Best Play, the Laurence Olivier Award for Best New Play, the South Bank Award and six Tony Awards.