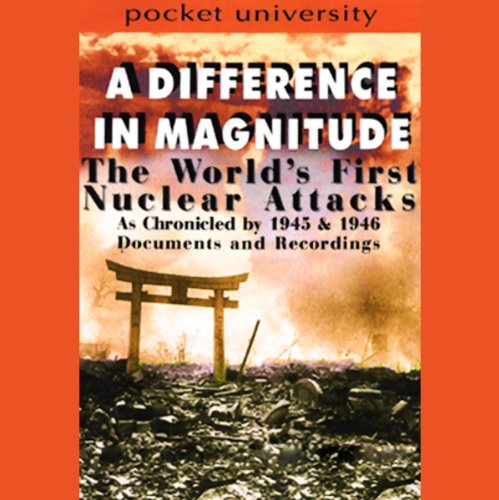 A Difference in Magnitude

In post-9/11, nuclear proliferation has put new meaning to the world's first nuclear attacks. Defense analysts say that America could be next. The attacks on Hiroshima and Nagasaki give us a clear picture of the consequences and underscore the imperative of vigilance and preparedness. With this in mind, Pocket University is releasing another important and timely audiobook.

A Difference in Magnitude uses selected government documents, radio and newsreel broadcasts, and eyewitness accounts to tell the story of the atomic bomb and the nuclear attacks on Japan. Letters, official memos, and diary entries describe the Trinity Test in White Sands, New Mexico; recount President Truman's thoughts before the attacks; tell of the opposition of scientists who worked on the Manhattan Project; and give Japan's response to the devastation. Extensive and well-written reports detail and quantify the destruction and casualties. Included are information on how the atomic bomb works and how it compares to conventional weapons, the reasons for the attacks and how the targets were selected.

Original documents and recordings provide an authenticity that only audio can give. An interview with members of the crew who dropped the first bomb conveys the objectivity and remoteness of the execution. Eyewitness reports by a Jesuit priest who saw and felt the blast and then treated the injured and dying. And a girl, a student at a junior college who was less than a half-mile from the explosion, describes the havoc and horror on the ground. Masterfully narrated by Ralph Cosham, this original production is powerful and compelling.