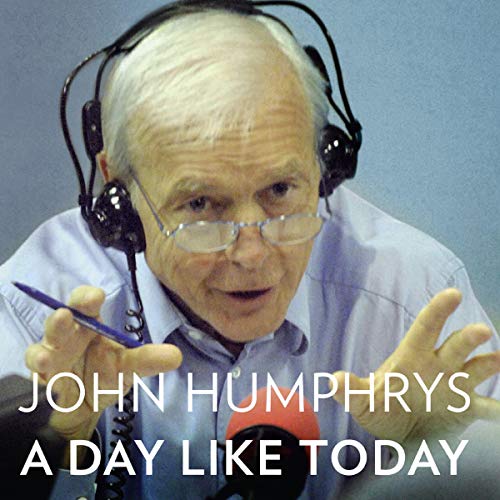 Read by John Humphrys, with extracts from his fiercest on-air interviews.

For more than three decades, millions of Britons have woken to the sound of John Humphrys’s voice.

As presenter of Radio 4’s Today, the nation’s most popular news programme, he is famed for his tough interviewing, his deep misgivings about authority in its many forms, and his passionate commitment to a variety of causes.

A Day Like Today charts John’s journey from the poverty of his post-war childhood in Cardiff, leaving school at 15, to the summits of broadcasting. Humphrys was the BBC’s youngest foreign correspondent, the first reporter at the catastrophe of Aberfan, an experience that marked him for ever; he was in the White House when Richard Nixon became the first American president to resign, in South Africa during the dying years of apartheid, and in war zones around the globe throughout his career. John was also the first journalist to present the Nine O’Clock News on television.

Humphrys pulls no punches and now, freed from the restrictions of being a BBC journalist, he reflects on the politicians he has interrogated and the controversies he has reported on and been involved in, including the interview that forced the resignation of his own boss, the director general. In typically candid style, he also weighs in on the role the BBC itself has played in our national life – for good and ill – and the broader health of the political system today.

A Day Like Today is both a sharp, shrewd memoir and a backstage account of the great newsworthy moments in recent history – from the voice behind the country’s most authoritative microphone.

"Offers readers the best bits of an extraordinary – and lucky – life that canters through key moments of recent history...Humphrys even offers us glimpses of his human side off-mic." (Sunday Times, Best Books of the Year 2019)

"This is one of the best books ever written about our industry." (Piers Morgan)