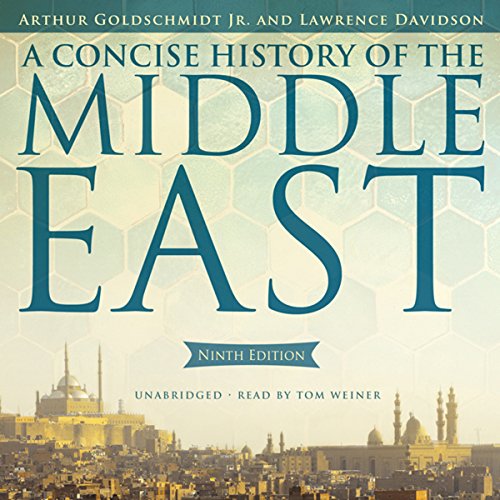 A Concise History of the Middle East, Ninth Edition

The ninth edition of this widely acclaimed text has been extensively revised to reflect the latest scholarship and the most recent events in the Middle East. As an introduction to the history of this turbulent region from the beginnings of Islam to the present day, the book is distinguished by its clear style, broad scope, and balanced treatment. It focuses on the evolution of Islamic institutions and culture, the influence of the West, the modernization efforts of Middle Eastern governments, the struggle for political independence, the course of the Arab-Israeli conflict, the roles of Iraq and Iran in the post-9/11 Middle East, and more.

Arthur Goldschmidt, Jr., is professor emeritus of Middle Eastern history at Pennsylvania State University. He is the author of Modern Egypt: Foundation of a Nation-State and the recipient of the Amoco Foundation Award for Outstanding Teaching and the 2000 Middle East Studies Association Mentoring Award.

Lawrence Davidson is a professor of history at West Chester University. He is the author of several books, including America’s Palestine and Islamic Fundamentalism.

“The premier text for the study of the Middle East. Goldschmidt and Davidson’s well-written and solidly argued analyses of the most important and crucial developments of Middle Eastern history and politics…could not be timelier.” (Robert Olson, University of Kentucky)
“I can only offer unmixed praise for the new edition of A Concise History of the Middle East….Sparklingly clear and straightforward for even the ‘general reader.’…Remarkable.” (Mark Seifter, Lehigh Carbon Community College)
“Well-organized, comprehensive, balanced, and exceptionally readable….The authors blend significant historical detail with timely political analysis in a cogent style that is compelling and lucid.” (Donald Wagner, North Park University, Chicago)

Brilliant and in depth look at the region and its history. Full of interesting facts and very wise interpretations of them, really eye opening. Great book!

a book We all should read

This book needs a second Edition for recent devellopments. Up to 2009 it's very accurate and impartial.a must read to understand the World today and especially were it came from

A unilateral history of the Middle East

In an age with books like Yuval Harari's Sapiens, the book feels completely out of time. It is nor a concise history as it reduces the pre-islamic history to a couple of sentences, nor is there any effort to give the storytelling any scientifical basis. It portraits every actor within the history as an Islamic person regardsless of the actors personal affinity, justifies the objective cruelties as - on the overall - not so bad as described or less bad than the Western culture would have done and accepts paternatilistic views by the argument that after all the people are maybe more happy under this regime as under the alternative.

In spite of the critique, yes, the book gives a good overview over the history of the said region and let us ponder over the power play between failing and rising empires that turned this region into a sad place. A worthwhile read for somebody with a critical mind and the willingness to peruse further on the subject.