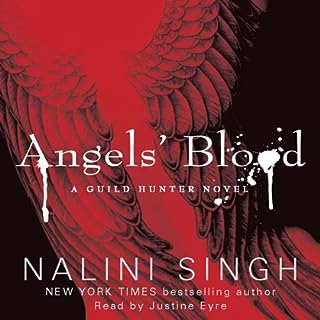 Vampire hunter Elena Deveraux knows she's the best - but she doesn't know if she's good enough for this job. Hired by the dangerously beautiful Archangel Raphael, a being so lethal that no mortal wants his attention, only one thing is clear - failure is not an option... even if the task she's been set is impossible. Because this time, it's not a wayward vamp she has to track. It's an archangel gone bad. The job will put Elena in the midst of a killing spree like no other, and pull her to the razor's edge of passion.

Great book, but intonation is lacking...

I love this series by Nalini Singh and have read all the books out so far.
The storyline is unique with many new takes on angels and vampires, which makes it entertaining and fresh. - Therefore, the three stars!
However, the way the story is read - and this can already be heard in the short sample - is pretty nasal and, thus, makes some of the characters and certain passages of the story what other reviewers have called "whiny".
It is obvious that the orator has a knack for accents, but the main characters lack that particular something that is given to some of the lesser characters. What I found especially disappointing was that some of the intonations actually described by the author as "husky"/"whispered"/"low" etc. were in no way inflected that way. Some parts were also fairly monotonous and I had a hard time sticking with the narration.
Compared to other orators like Susan Ericksen or Ellen Archer or Emilia Fox, Justine Eyre - for me! - did not stand up and I would not buy the other books in the series, but stick with the written version...