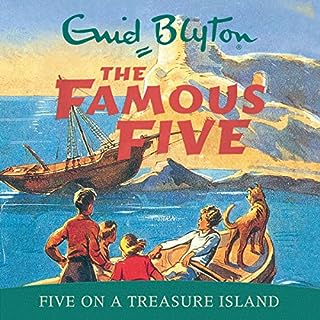 There was something else out on the sea by the rocks - something dark that seemed to lurch out of the waves...What could it be? Julian, Dick and Anne are spending the holidays with their tomboy cousin George and her dog, Timothy. One day, George takes them to explore nearby Kirrin Island, with its rocky little coast and old ruined castle on the top. Over on the island, they make a thrilling discovery, which leads them deep into the dungeons of Kirrin Castle on a dangerous adventure. Who - and what - will they find there?

the story and most of the characters are lovely, but the gender roles are shocking from a modern perspective. Anne is completely useless at everything and always needs a boy's help. George is only ok because she is trying to be a boy and Aunt Franny is a shallow materialist who has to obey her husband.
other than that, the story is nice.